In February 2011, T and I decided to go to Japan for our long-awaited honeymoon. There were a couple of reasons why we decided to go to Japan. But ok...mainly it was because I love love love Japan. I've been to Japan twice then, once when I was very young and once when I graduated from my Bachelor's degree. When I was very young, my family and I went with a tour. When I took my graduation trip, I went with a friend sans tour as by then both of us knew sufficient Japanese to travel on our own. My friend and I met in a Japanese language school BTW.

Anyway, I always found Japan to be a very fascinating place. Furthermore, T wanted a relaxing place for honeymoon, while I wanted to shop. I also knew that Japan has one thing that would piqued T's interest....robots. LOL

After booking our tickets and hotels, on March 11th, the Japan Tohoku Region disaster struck. Since we were going in April, we thought it would be prudent to wait and see the development of the situation instead of rushing off to cancel our tickets etc. By the 2 weeks before we left, the issue with the nuclear plant in Fukushima Prefecture did not improve, aftershocks were still felt in Tokyo and surrounding areas. After discussion and deliberation, we decided to go ahead, but taking Tokyo out of our itinerary.

I will blog more about the trip, but what I wanted to share this time is if you look at the map above, you would see that actually Japan is divided into different regions. It is important to note, while the situation impacts Japan (emotionally) as a whole, the places that are greatly affected is the Tohoku Region. Being close to Tohoku, hence Kanto (where Tokyo is) and Shinetsu (Though we did go here on our trip) are also impacted by the aftershocks. In other areas of Japan, no aftershocks are felt nor is the nuclear situation an issue.

Why I wanted to clarify this is because due to foreign media reporting, there are misconceptions that the whole Japan is impacted by the aftershocks and nuclear threat. Places that are not experiencing these issues are impacted as a result of tourists cancelling their flights.... in fact, talking with the locals whose livelihood depends on tourists, it is another sad blow to their economy.

Japan is an amazing country, with diverse things to see and experience within the different regions. I would say, if you are planning a trip to Japan and you are not going to the affected areas to begin with, you should just go. We did and we had a blast.... it is also one good way to support Japan's recovery. :)

For more info from people who went to Japan after the disaster: http://www.japan-guide.com/

there's something about jen... 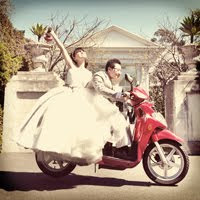 A girl who loves to create, explore and be inspired. Crazy enough to study design then business and now her post-grad in science. Love colours, lines, dots, florals, textures and anything that sparks her creative imagination!

If you are interested about how I ended up doing my PhD and my PhD topic, you can read about it on Tweet to Thesis.

then there was the honeymoon...

This is a Flickr badge showing public photos and videos from jen@me.u. Make your own badge here.